Hello!  It’s Junebug!  Mark and Miss Georgia have been very busy lately, so they asked me to do a blog post to update all y’all.

I think it’s important to say that after we sold lots of our stuff (for treat money) in what is called a “garage sale,” we packed up what was left, including our toys, and drove a really, really long time. 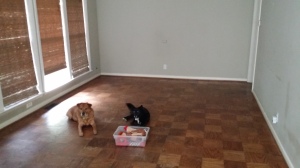 After a short stop to visit more of our family in Kansas, we are now in a place with lots of new smells and great places to walk dogs! It’s called Minneapolis.  It’s gooder!  The neighbors next door seem to have a dog and a little tiny person as pets. I’m not sure what to make of that yet.  The tiny person points at me and says “doggy!”  Weird.  So far I’ve chased squirrels, chipmunks, birds, mice, and a couple of unidentified varmints.  If it weren’t for that dang leash, we’d be eating good around here.

Our friend Jerry helped us build our new puppy hauler.  It’s so cool!

Soon I’ll be sure to get some finished pictures up that show you how great it is for little dogs.  Let me just say, I’ll probably be taking a nap or two back there.  Biscuit is the navigator anyway, and he likes to hang his head out to catch a breeze, so he’ll let me know if I need to be up and alert for action.

Oh, we had some frozen custard!  It was tasty!  We almost never get people food.  Biscuit said you are supposed to eat it slow so you don’t get brain freeze, but I didn’t listen, as you can see.

As some of you probably know, Mark is now jobless.  I told Mark that I could catch some squirrel for dinner if needed, but he said the situation isn’t that dire yet.  I figure “dire” means we are waiting until a special occasion to celebrate.  Those twitchy little squirrels…so fun to chase!  Anyway, Miss Georgia says her last day of work is in July, whenever that is.  It seems like a long time away, but then it also seems like a long time when Mark goes to get the mail from the mailbox, so maybe dogs aren’t the best at calendar stuff.

Next weekend we are going on another short bike trip!  It is going to be great!  Biscuit is concerned it’s going to rain, and he’ll wake up with a wet face again.  I’ll betcha he doesn’t sleep down at the end by himself again this time, eh?  (That was me, trying out the local way of talking.)

It’s time to go patrol the house for flies.

If you are new to our adventure…

If you enjoy following our adventure, please consider a small donation …

There was an error retrieving images from Instagram. An attempt will be remade in a few minutes.